WonderPhil is a Toronto magician who's shows have been a huge hit in the GTA, Durham region, and beyond. With decades of performing experience he is now the most in demand magician for children’s parties in the GTA, performing at hundreds of birthdays and other private events every year. Along with private events, he’s a favourite at Toronto Public Library events, as well as daycares and especially summer camps.

In 2020 his livestream magic shows on Facebook Live and Zoom were watched and enjoyed by over 100,000 people from all around the world.

Over the years WonderPhil has won many awards for his magic, writing and other talents. He has lectured about performing magic shows to other family enterainers at local and international conventions, and has published and sold his hit routines that other magicians now perform all around the world. His awards include A1 Media’s Toronto’s Best Magician Award, a Toronto Fringe Playwriting prize and a national playwriting award. You can checkout clips from his award winning magic act on his YouTube Channel)

A lot of the fun of being a magician, is that there is always more to learn and discover. When he’s not practicing and performing his magic, WonderPhil will often be studying new material from magicians all over the world. In recent years, he’s also started teaching magic. Most of his lessons take the form of workshops at local libraries and for other specialty programs, but he also offers private at-home lessons.

Tricks and magic are just the beginning. It’s the foundation on which WonderPhil builds his shows. On top of that foundation though is a ton of entertainment. His goal is to get the kids laughing, interacting, and helping to make the magic happen. This will not only help ensure they have an incredible time watching the show, but it means they’ll have special memories to last them a life time.

WonderPhil can also be seen performing for adult audiences at weddings, birthdays, and other private events, as well as at corporate functions, and local clubs and theatres. As well as presenting his original magic to audiences in his stage and close-up shows, his original creations and thoughts on magic have appeared in magic periodicals, books, and turned into best selling products for magicians around the world to buy, and add to their acts. 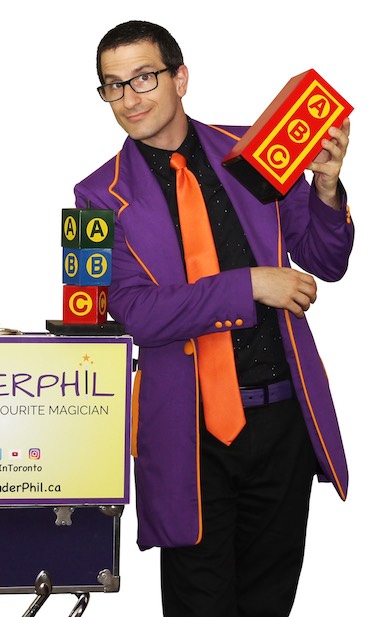