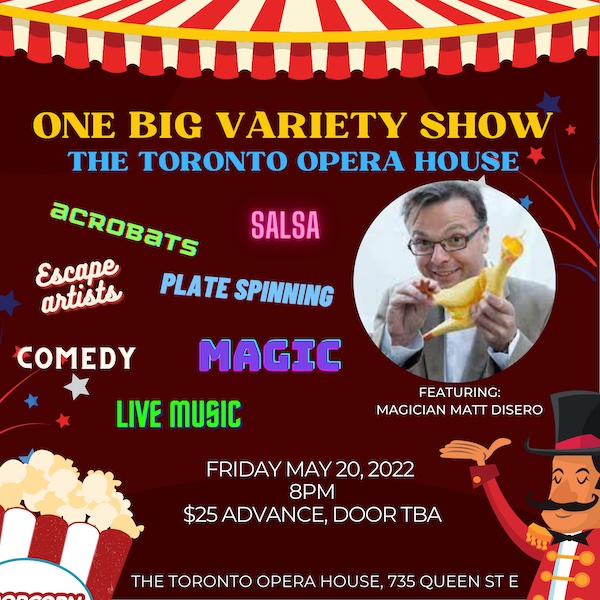 On May 20th, leave the kids at home, and come join the fun at the historic Toronto Opera House!

Matt Disero will rule the night with his comedy magic act that's taken him around the world, and on TV.

The night will also feature magic from WonderPhil, mentalism from Ben Train, as well as many other incredible performers.

Your featured performers are:

Matt DiSero (Magician): One of Toronto's most sought after magicians, Matt has worked with comedy greats such as Drew Carey & Jerry Seinfeld. He has starred on Penn and Teller's Fool Us, and has headlined shows at the world famous Magic Castle in Hollywood, California. He has performed at exotic locales such as Tokyo, Italy, London, Cypress, Australia, United States. Tonight, he's our headliner, and you're in for a one heck of a show!

Christopher Campbell (Escape Artist): Christopher is a fire, sideshow and escape artist who has wowed audiences all over the world. He has performed professionally for over a decade, and specializes in challenging the audience and their perception of reality. He is the founding member of the StrangeOrDanger Thrillshow Multi-World Record Holder show, and was recently featured on AMC Freakshow. This is a unique act that you'll want to be there for.

Makenzy Williamson (Musician): At just 18 years old, Makenzy is a musical phenom and is making waves in the Canadian music scene. She's very well versed in piano, guitar, vocals, and song writing. She brings her powerful and chilling voice to the stage, along with her passion and soulful energy. She will do a mix of covers and originals which you are sure to love.

John Park (Plate Spinner): John's performance journey has taken him from Hollywood, where he appeared on HBO's award- winning "Larry Sanders Show," to Las Vegas, where he performed in "Splash" at the Riviera Hotel and Casino on the Strip. His engaging performances have won over audiences like top executives at Microsoft and IBM, as well as CityTV and numerous festivals around the world. His comedic act will have you in awe, while laughing hysterically.

Wonderphil (Comedy Magician): One of the premier performers in Toronto, WonderPhil is not just a magician, he's an entertainer. His shows contain laughs, amazement, and mind boggling illusions. He's delighted audiences across Canada, and now we're bringing him to you on the TacoTaco Main Stage! His weekly magic show is one of the hottest tickets in magic in Toronto, so this is one you won't want to miss.

Anjelica Scannura (Comedian and Actor): Recently selected to be a featured performer in this year's Winnipeg Comedy Festival, she's definitely one of Toronto's fastest rising stars. She was a finalist in Toronto Comedy Brawl 2019, and the winner of the ‘I Heart Jokes Awards’ 2018 Newcomer comic. As an actor, you’ve seen her in Disney’s Camp Rock, Disney’s Overruled, CTV’s Satisfaction, APTN’s Renegade Press, TIFF’s Manson My Name is Evil, and CBC’s Frankie Drake Mysteries.

Amy Aubrey (Salsa Dancer): Having done Salsa for most of her life, Amy's passion for dance is second to none. She's a Salsa instructor, and can be seen performing and teaching all over Toronto. She's set to hit the stage with her partner to razzle and dazzle you with her graceful dance moves and soulful energy.

Ben Train (Mentalist): One of Toronto's premier mentalists, this world-renowned mindreader uses his humor, psychology, and mind-blowing sleight of hand to AMAZE his audience! He will have you laughing out loud and wondering in awe at his mind reading tricks. He is the author of several books and DVDs and has had his work featured in numerous mentalism publications. Sit back, relax, and enjoy one of Toronto's premier performers at work.

"I’ve been involved with organizing Children’s Christmas Parties for our company for many years now and I have to tell you, that your show received amazing feedback from the kids and the parents. It truly was one of the best I had a chance to experience so far! Thank you for helping us making this day truly magical."

"WonderPhil is a terrific entertainer. He delighted all the guests at the 5th birthday party, ages 2-70."

"Hilarious and entertaining for all ages! I was afraid to host a party for 12 kids ranging in age from 4-8 years, at my house. How would I keep them entertained?!? WonderPhil did it for me! He had everyone (including adults) laughing and in awe of his magic. Highly engaging and made the time fly by! I recommend WonderPhil for ANY birthday party!"

"(My class) loved it! Super Interactive, lots of laughter... I highly recommend his services."

"Thank you so much, we got so much feedback about how awesome your show is."

"We had an amazing moment in my son’s 6th birthday. The magic show was awesome. The kids stay focused on the magic show for one hour!!! I just want to say thank you for your amazing magic show. I highly recommend this show for any events."

"I just wanted to let you know that we received only 5-star reviews for your performance!"

“Phil joined our Adult Social Club for a 30minute virtual magic show and he was fantastic! He positively engaged with participants and participants reported that they loved the magic show. Phil is enthusiastic and full of energy which makes the session even more fun. Thank you Phil!”

"Thank you so much for joining us for our March Break week of fun! Your performance was "Wonderphil" and we look forward to welcoming you back again in the near future."